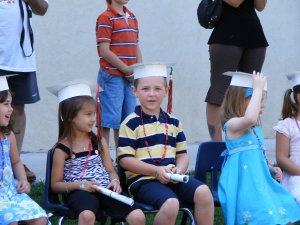 Soon, he will leave the teachers and caregivers he’s grown to love over the last 4 years and venture into a new future.

A milestone has been reached in the BagMomma house. David’s teachers have moved him up to the big kid’s class… Pre-K

Where did the time go? It seemed like yesterday when I first brought David to his daycare at 5 months old. A little baby. I cried all the way home that first day after dropping him off. Being without him for 7 hours, three days a week was sheer torture. I remember picking him up on his first full day and wondering if I would recognize my own child amongst 6 babies.

I swear I did.

And, there he was, propped up and sitting on a yellow foam chair, in his Winnie The Pooh overalls, red cheeks, smiling. He didn’t even miss me.

Then time accelerated through the toddler stages and then preschool.

And here we are. Next Monday he starts in his new room. Since it’s Summer Camp Season, he won’t be diving into his subjects until September (its all sun and fun for now). The room has these little desks they sit at for a short time during the school day (to prepare them for the environment when they go to elementary school).

When I picked him up yesterday he hugged me and led me into his soon to be “old” preschool room. In his cubby was a giant blue bag with his summer camp stuff issued from school, a camp t-shirt, and goodies.

He picked the bag up, swung it over his shoulder and exclaimed, “Mommy, I am a big boy finally! YAY!”

Finally…. as if each milestone hasn’t mattered along the way.

For him, and most of his friends… they look at the Pre-K room like it is the holy grail of daycare. They wonder what goes on in the room, they see desks and personal computers, and separate art and play rooms. The little kids look though the glass on the way to the other rooms and marvel at “the Pre-K room”.

Where the big kids are. The “cool” kids. Like looking into a fishbowl.

David told me he was going to spend an hour or two in his new class today, so I am betting about now that he has his sh*t-faced grin on.

They grow up so fast.

It’s a weird day, saying goodbye to an employer of 25 years and saying hello to a new one. Lots of excitement awaits. It’s never too late for a new beginning!
Birthday Dinner ❤️
David’s first day of college classes today! No picture🙁, but here’s a flashback 10 years ago WITH his future college home already in wardrobe rotation! GOOD LUCK BUD!!! ❤️🦉🦉👏🏼
Introducing… Sam and Dean. 😊🐈 🐈 😻🌓🪄These newly adopted kitten brothers joined our family yesterday and are already enjoying the good life.
Congratulations 2️⃣0️⃣2️⃣1️⃣👨‍🎓🎉
Handsome 🥰
© 2006-2020 BagMomma The contents of this website are protected by applicable copyright laws. All rights are reserved by the author.
https://s3.amazonaws.com/cgc-badge-v2/load.min.jshttps://s3.amazonaws.com/cgc-badge-v2/common.jshttps://badge.clevergirlscollective.com/v2/byFaT1Sz0frr38M06SqRQn0oKlCU1k05.js
%d bloggers like this: