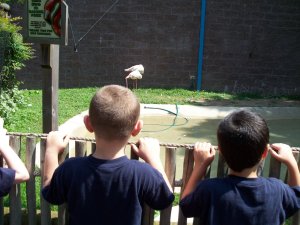 I remember my first official elementary school field trip. We went to the zoo. I don’t remember a lot about that trip, but I do remember we did a lot of walking. Most of the stories are retold by my Mom (she remembers the early days a lot better than I do).

Yesterday, I took off a day of work, laced up my walking shoes, packed a bag that I swore I would regret carrying (more on that in a sec), and joined the commune of (mostly) SAH Moms for the Kindergarten extravaganza of excitement and torture… otherwise known as the “trip to the zoo”.

Oh, the bag… I must tell you. I didn’t want to bring the Coach bag, so I switched to a Vera Bradley tote instead. The contents? Plentiful for student emergencies. I had wipes, tissues, band-aids, sunblock, water, tylenol, extra clothes, an umbrella, snacks, camera, napkins, and about 5 other miscellaneous items that made the bag so heavy I could have used it as a lethal weapon.

But then as I met and started talking to some of the other moms, I realized they were carrying small purses or NOTHING. Which kind of intrigued me.

Let me tell you a little bit about my son’s catholic school. Most of these Moms have LARGE families. If you work full-time or have two or less kids they marvel at you like you are some sort of endangered species. So, I have to wonder, why pack so light? I thought they would be the ones hauling the stuffed backpacks and acting in line with the Girl Scout motto… “Be Prepared!” But no, not the case.

So what if I told you I used EVERYTHING in my bag? Oh yes. I administered first aid once (to one of my assigned kids), donated all my napkins to another Mom cleaning vomit, dispensed all my band-aids, and used up my sunblock, used all my wipes (when the bathroom ran out of toilet paper), and donated a shirt to a poor little guy who got sick on himself. I strategically used all my snacks to bribe two kids to sit quietly and stop bugging each other on the bus.

I even became the staff photographer when several moms forgot their cameras.

The kids had a great time, the only downside was the zoo we went to was more than an hour away, so our time actually IN THE ZOO was compressed to three hours (and we had to build lunch in there too).

It was a nice day. And, after trolling the zoo looking at zebras, snakes, and alligators keeping track of a herd of kids (and saving the day with my two ton tote) I think I would qualify as a mom deserving of more than one kid, don’t you?

Should I ask my RE to transfer a litter of donor embryos?

Because I wanted it and have denied myself for too long:

And because I had a $250 gift card I decided, well, how about some sandals for my upcoming vacation?

Because I deserve it.

Screw the budget for just one day. I am happy.

So I am patiently waiting for the big afternoon. Meanwhile, as to not forget the origins of this blog, I needed to share my latest Coach handbag acquisition:

I’ll admit, it’s a splurge, even by Coach standards… but considering the medical debt I am in, what’s more money? lol. In all honesty, if you are a regular reader or know me IRL, you know I’ve not spent a penny on a handbag in like, 9 months. That is a record for me, and records are made to be broken!

Don’t judge me, I am in a weak state at the moment… 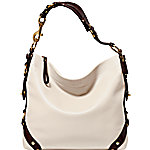 Last weekend I used up the remaining gift cards from the holidays. Of course I bought a purse. I think I deserve this one. This may be the last personal purchase I make for quite awhile. lol.

It’s finally Friday. The end of a very loooooooong and challenging week. I hope you all have a nice weekend.

First work trip in many years, all the way across the country. Happy to work for such a fantastic organization. I love a city that loves coffee as much as I do!
We don’t use zoom at the ‘Zon but this was too funny not to post. Enjoy work buds, you’re on mute. 🤫
Somebody is excited 😆
It’s a weird day, saying goodbye to an employer of 25 years and saying hello to a new one. Lots of excitement awaits. It’s never too late for a new beginning!
Birthday Dinner ❤️
David’s first day of college classes today! No picture🙁, but here’s a flashback 10 years ago WITH his future college home already in wardrobe rotation! GOOD LUCK BUD!!! ❤️🦉🦉👏🏼
© 2006-2020 BagMomma The contents of this website are protected by applicable copyright laws. All rights are reserved by the author.
https://s3.amazonaws.com/cgc-badge-v2/load.min.jshttps://s3.amazonaws.com/cgc-badge-v2/common.jshttps://badge.clevergirlscollective.com/v2/byFaT1Sz0frr38M06SqRQn0oKlCU1k05.js
Loading Comments...
%d bloggers like this: