Whew! What a holiday weekend. From Turkey Day all the way through Sunday we managed to use every last spare moment of time.

Thanksgiving Day here at home was… exhausting, but fun. This is me and S. after 24 hours of cleaning and cooking…lol 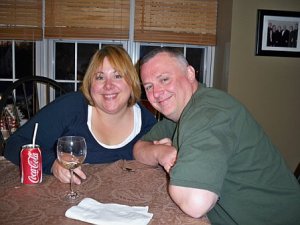 Then we woke up Friday morning and drug out every last box of Christmas decorations. Was I meaning to do that? Hell, no. I was looking to just kick back and relax, but David had other plans. He’s the worst supervisor, by the way.

Saturday we got up early and headed to the Please Touch Museum in Philly. It’s in a new venue (such a beautiful building).

It had lots of hands-on stuff for the kids, and the adults. My personal favorite was the restored Dickens Village (think Christmas Animatronics set in 1776). The last time I saw the full display was waaay back in the 70’s. It was an annual Christmas event at Lit Bros. Department Store in the city.

Sunday, we woke up to rain. And fog. And sleet. And more rain. We had tickets for the North Pole Express Train Ride. We met my brother, SIL, and the kids after a 90 minute drive, but it was well worth it.

It was the worst weather day… but you know what? It made for a great day anyway. Lots of rain meant people stayed in. Which meant we had a great time in a place that is normally packed with people.

The rain actually added character to the day. Doesn’t it look Christmas-y?

David and my nephews were bowled over when Santa walked onto the train to present them with a Christmas sleigh bell… they looked terrified and elated at the same time.. lol 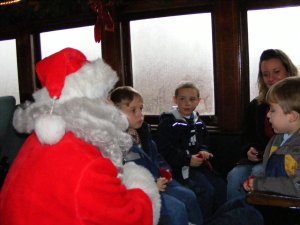 Afterwards we kicked back in a nearly empty brewpub, had great beer and pretty awesome burgers.

Yeah, it was a pretty cool weekend indeed.

Lastly… a fertility update: In case you all were missing my status posts on the donor egg cycle, well, get ready. Pre-work is complete, and the cash has been procured. Tomorrow is the appointment to delve into the Great Big Book of Donors. More to come…

Well, one more day of freedom before I am back to work. The time went so, so fast. Even though it didn’t turn out as I had hoped, it was a great 4 weeks off.

I giggled and giggled at the SNL skit from Saturday. Did you see it? I just can’t fathom the turn of events through this political circus (still trying to actually). If I was Hillary, I’d be in a seriously permanent bitchy mood. I don’t like to talk politics on this blog (how many times have you heard me say that?) but let’s just say the thought of Palin “one heartbeat away” from the Oval Office scares the ever-lovin’ crap out of me. And that’s all the political commentary you’ll get out of me.

I have my RE consult next Tuesday with Dr. Nerd and Nurse T (they coordinate the donor program). The IVF Nurse called me on Friday to let me know that my file was reviewed, and the consensus was to try another IVF cycle with a slightly tweaked protocol. No, really? I asked her if the subject of donor eggs was spoken, and yes, she said… it is an option… Then she tiptoed into the conversation about it, as if she has been waiting for ME to mention it. I picked up on the bizarre boomerang in the conversation and she confided that it was suggested, but they are instructed to “tread lightly” when approaching the conversation with patients. Apparently, there is a subset of infertility patients that freak the hell out when the subject is brought up. I understand that it is a very rickety bridge, and I also understand that for some it is a deal-breaker of sorts. You know that’s not me.

To put Nurse B at ease, I gave her one of my famous analogies… “Pretend I’m a dog, and there’s a delicious bone in the corner, but I have to break my leash to get to it. As I pull on the leash you move the bone out of the house, down the street, and throw it into a storm sewer. I break the leash, chew out the door of the house, run down the street, and squeeze my body through the storm sewer opening. I want that bone, and nothing will stand in my way to get it.”

The bills have started to roll in from my recent cycle. Those pesky billing clerks pulled a fast one on me. Usually, my RE bills two months in arrears. For instance, I am supposed to just now get my bill for services delivered in July. I thought I wouldn’t have to dish up major $$$ until October. But you guessed it, they sent me the bill for retrieval and transfer which I received over the weekend. The biggest one of course, and skipped over all my u/s and blood work charges from July/August. Losers. I’ll probably get the other bill today, and can promptly sob on my credit card statements.

David is doing much better with the new routine. He loves his classmates, and is getting really fired up about school. Yesterday was his first soccer game with the Township. Tuesday he starts school soccer. He’s just learning the game, but having a lot of fun. It’s funny to watch a bunch of five year-olds running on 1/4 of a soccer field. Half of them lunge for the ball, the others kind of run around in circles not sure what to do. Yesterday it was 92 degrees here in Jersey… way too hot to focus. Poor kids guzzled Gatorade in between each break. Hopefully the heat is over for the summer, and some cooler air is around the corner.

Being at home for the month has been interesting so far. Since I’ve been taking it easy for the last week or two, I’ve had the opportunity to be a couch potato.

Not since college have I actually watched daytime TV. Really. I just don’t turn on the TV during the day, even working from home.

I have to say that now that I have partaken in some TV watching, I’ve come to the conclusion that daytime TV is a joke.

“Maury”, for instance. It is illogical to watch show after show on one subject: “Who’s the Father?” These girls and boys need a reality check (or a stern slap across the face). Yesterday, I saw an episode that featured one young girl and THREE potential fathers. You guessed it, none were the father in the end. I don’t know whether to lecture the television regarding safe sex, or take an ax to it. Angers me to no end.

And let’s not forget the lovely “I’m having a baby” shows on those other channels. Today, a woman and a man ponder life with twins. Queue in the narrator, “Ann and John were expecting one boy and one girl, but to their surprise they had two boys upon delivery”. New Mom says, (and I am paraphrasing here) “I was so surprised, but then I was worried and a little upset I had so many girl clothes and decor…. I really had my heart set on one of each…”

Ummmmm, Ann? How about being happy you gave birth to TWO healthy babies with beating hearts?
Geeeeeeez…. are you kidding me????

Probably the one show I found palatable was a show I saw on the Dis.cover.y Health Channel that documented the pregnancy of a woman who, after 6 years of infertility, got pregnant via IVF with…. sextuplets (3 embies put in, two split to identicals, all took). I found it moving, especially when she got to 20 weeks and discovered two had passed away (she eventually gave birth to quads). Poor girl’s ultrasound was being filmed, and on camera she found out two of her babies died. Broke my heart.

But what truly took the cake was a show titled, “Half Man, Half T.ree”. No, I am not kidding. The dude had tree limbs growing on his hands and feet. Not making that up. I was speechless on that one.

If I were a smart woman, I guess I would have had my IVF scheduled during the new Fall season. At least I wouldn’t have to view reruns.

Instead, I revert to my favorite TV channel… CNN. Especially interesting this week with the Democratic Convention. ‘Cause I’m all geeky like that….

Maybe I’ll turn off the TV for the next few days. I’m worn out.

My boy hasn’t been able to celebrate anything during his senior year. At least he got this. His last home game and the end of his HS ice hockey journey. You did it bud! Time to crush some new dreams! ❤️ 🏒 🥅 👏🏼⭐️
😂 after my personal hell in 2020, I’m tentatively tiptoeing into 2️⃣0️⃣2️⃣1️⃣ Happy New Year.
The path of a high school senior in 2020-21 is weird and difficult, but he already succeeded in making the best of it. Here’s to the home stretch buddy! You are a superstar. ⭐️
It’s been almost two weeks since I became a cancer survivor. I made a promise to myself that I will forevermore leave fear in my side pocket. It travels with me, but it doesn’t own me. ❤️💪🏼 #cancersucks #cancersurvivor #kidneywarrior
This is my best buddy, Harley. Since I got home from the hospital after my kidney surgery he has slept in the spare bed with me. This morning he noticed my wounds on my abdomen and he sniffed and gently laid down his head. I swear that animals know when you feel pain, and for sure they are gentle creatures that help us humans recover faster. Thank you Harley. ❤️ 🐈
❤️
© 2006-2020 BagMomma The contents of this website are protected by applicable copyright laws. All rights are reserved by the author.
https://s3.amazonaws.com/cgc-badge-v2/load.min.jshttps://s3.amazonaws.com/cgc-badge-v2/common.jshttps://badge.clevergirlscollective.com/v2/byFaT1Sz0frr38M06SqRQn0oKlCU1k05.js
%d bloggers like this: