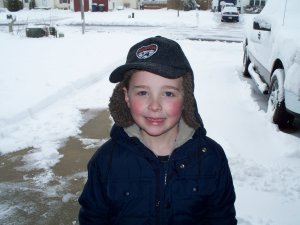 Well, the sickness finally caught up to David. It’s been nearly 3 years since he had even a whisper of a fever (he rarely gets sick, pretty amazing for a 5 year old).

On Saturday morning he was sporting a 102.5 degree fever, which pretty much carried through the whole weekend. He played the role too… camped out on the recliner, drinking fluids only (begging for a special treat of soda) and lamenting that his head hurt too much to play his Nintendo DS. (That’s when we knew he wasn’t joking, lol).

Lucky for him, we had a boatload of snow last night, so instead of being off sick from school for the first time, he is off with all the other kids in our area for a snow day.

S. had to leave for work at the crack of dawn, used the snowblower to clear the driveway before he left, but 30 minutes after the snow was still coming down. I would guess about a foot total, but perhaps more… it was so windy overnight the snow kinda drifted everywhere.

David begged me to suit him up so he could play (for a very short time while I shoveled the bottom of the driveway after the plow trucks plowed us in). He wasn’t out there five minutes when he shouted shoveling skills to me,

“Mommy, that’s too much snow. You can’t lift that!”
“Mommy, you’re doing it wrong!”
“Mommy, wait for Daddy to come home. He will do it better.”

aha, yes. That was the best idea ever. Fortunately, a wonderful man-neighbor saw me digging out, and came over to finish what I started.

So… except for the unusually flushed cheeks (as documented above), David’s feeling a lot better today.

And I got in my workout.