Have you missed me?

I have to say I certainly did not miss a week away from technology. I’m not back to work until tomorrow, so I still am feeling blissfully unaware of the reality of life.

Vacation was a mixed bag of oddity and lovely.

We arrived to Hilton Head Island in clouds and rain after our 11 hour road trip on I95. Let me tell you, if you are on the East coast, you know what I am talking about when I tell you North and South Carolina seem to go on f-o-r-e-v-e-r.

Not to mention we ate lunch at the ugliest Burger King east of the Mississippi.

The first couple days were not pool days. It was warm, but we had clouds and on and off showers Sunday and Monday. Thank goodness that there were activities for kids. David had a ball sitting in on crafting sessions and learning about the alligators and sharks in the Lowcountry.

Behold the sharks-tooth necklace made by David and me: 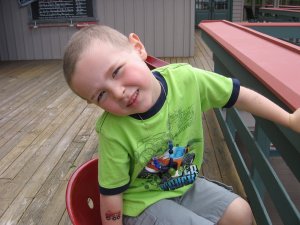 The last half of the week was better weather-wise, except for the low-pressure storm Andrea that crept in on Wednesday and brought wind and rain. It’s not hurricane season yet, but leave it to our family to bring forth a highly-unlikely meteorological event during our vacation week.

S. almost broke his arm on our deck rocking too far back on a rocking chair.

And, did I mention that we all got trapped in an elevator?

Oh yes, the highlight of our trip. We had just spent a sunny Thursday at the beach and as we attempted to leave the beach house, we decided we were too lazy to walk down one flight of stairs, so we took the elevator… all seven of us.

David pressed the G (for Ground) button, and the doors closed. The elevator lurched and grinded.

We press every button.

I begin to envision what it must be like to die in an elevator with my in-laws. It’s hot, it’s small, and my brother-in-law decides to freak the hell out. I am claustrophobic, but I tried to hold it together for David. My BIL was ready to crawl out the top.

Hubby uses the phone in the elevator box to call 9-1-1. We tell them we are trapped in an elevator. We know the fire station is a mere two blocks away, so we try to stay calm. It seems like forever, but they do come, after, I don’t know…. 15 minutes???

“Step back from the door!” they yell. I am expecting a rescue from a movie, like seeing them cut the door open with a sodering iron or a saw. Instead they pry open the double doors.

To which, David sees the fireman, and says…. “Cooooooool!!!!”

After I regained composure, we got to take a few pictures with Fireman Tim. David was in heaven. 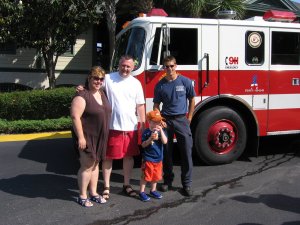 After that, we had one more day of sun and fun. We swam all day. There wasn’t a cloud in the sky. Finally, after six days, I was relaxed.

By then it was time to leave. It took a mere 13 hours to get home.

As with most vacations, this one was fun, bizarre, stressful (at times) and as usual always interesting. We just don’t do boring vacations around here.

David had a complete blast. He was in sheer heaven the whole week. It could have rained every single day and he wouldn’t have cared. By the end of the week he was swimming on his own!! And, on Saturday, my little guy turned four.

No doubt, the memories from this vacation will never be lost. I have 250 photos to prove it.

2 thoughts on “Vacation memories: I swear we are the Griswolds.”

First work trip in many years, all the way across the country. Happy to work for such a fantastic organization. I love a city that loves coffee as much as I do!
We don’t use zoom at the ‘Zon but this was too funny not to post. Enjoy work buds, you’re on mute. 🤫
Somebody is excited 😆
It’s a weird day, saying goodbye to an employer of 25 years and saying hello to a new one. Lots of excitement awaits. It’s never too late for a new beginning!
Birthday Dinner ❤️
David’s first day of college classes today! No picture🙁, but here’s a flashback 10 years ago WITH his future college home already in wardrobe rotation! GOOD LUCK BUD!!! ❤️🦉🦉👏🏼
© 2006-2020 BagMomma The contents of this website are protected by applicable copyright laws. All rights are reserved by the author.
https://s3.amazonaws.com/cgc-badge-v2/load.min.jshttps://s3.amazonaws.com/cgc-badge-v2/common.jshttps://badge.clevergirlscollective.com/v2/byFaT1Sz0frr38M06SqRQn0oKlCU1k05.js
%d bloggers like this: